Mark is a professional Spanish guitarist based in the South West of the UK. His experience of live performances spans over 30 years. His repertoire includes Latin, contemporary, Flamenco and World Fusion as well as traditional Spanish guitar pieces - original music alongside covers from artists including the Gipsy Kings, Santana, Sting, Eagles and the Beatles.

He is a dynamic live performer and has also distinguished himself as a composer, recording artist and session musician. He has recorded five albums including the recent award-winning "Mandala", released in 2016.

Mark has also travelled and performed with top musicians from around the globe. He has performed in countries including Greece, France, Germany, Australia, India and most recently appearing on stage with World Fusion band Incendio in California, who also make guest appearances on his "Mandala" CD.

"Mark Barnwell is certainly talented and respectful of that talent, he has a skill though, that in music is quite rare, he has the ability to create great musical imagination and wonderful vistas through his performance and his skill as both a musician and composer"
- One World Music (www.oneworldmusic.co.uk)


"Mark's guitar performance is very mature. He plays clearly and convincingly. Besides the excellent technique, in his music there is his emotion, his passion, his heart."
- Viktor Mastoridis (BBC)

"This man can make a guitar sing"
- John Govier (BBC) 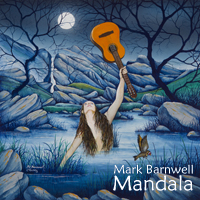 Click on the title or the actual photo to get a hi-res version of the photo suitable for promo.